The City of Donaldsonville's history dates back to 1805 when Englishman William Donaldson purchased land near Bayou Lafourche from Acadian Marguerite Allain. By 1806, "Donaldson" was dedicated. The mostly French population called it "La Ville de Donaldson."

In 1823, the area was reincorporated under its present name, Donaldsonville.  From 1829-1831, Donaldsonville served as the Capitol of Louisiana. It is also known as the place where the first African American citizen, Pierre Caliste Landry, was appointed to serve as Mayor of an incorporated town. His historical legacy, like numerous other significant achievements of the City have named Donaldsonville as one of the most significant black history treasures in America.

In 1903, a two-century-old debate ended with the damming of Bayou Lafourche in favor of locks to prevent seasonal flooding in the bayou’s lower reaches.  Once the debate ended, so did the talk of locks and for two decades Donaldsonville declined. With the advent of the automobile, by 1930, this was reversed, and the town once again resumed it onward development. In the 1950’s and 60’s this changed with the addition of major industries, the Sunshine Bridge over the Mississippi, and the opening of Interstate 10. 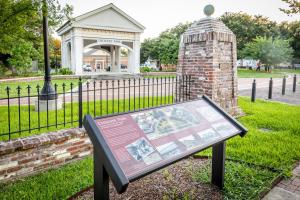 Donaldsonville's brand, “History Lives Here” is essential to its story as many historical events and landmarks still exist in the community today. Visitor's often comment on the charm of the City which is accented by the sounds of church bells and the smell of sweet olive.

The city capitalizes on its hometown charm and character. It has a passionate core of citizens interested in making the most of the opportunities to create a dynamic and prosperous future.

Studies have shown a steady flow of a quarter of a million tourists to the river plantation region surrounding Donaldsonville. The area boasts the magnificent resources of the Mississippi River and Bayou Lafourche, which begins in Donaldsonville and ends in the Gulf of Mexico.